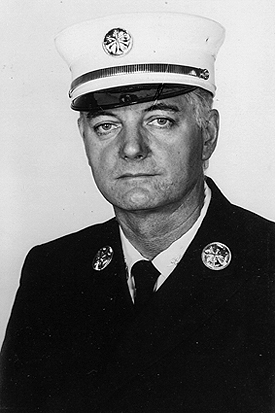 On January 26th 2011 a Fire-Com dispatcher signed on the air with a carbon monoxide emergency, assigned to the Garden City Park Fire Department. As Tom Regan had done for nearly half a century he began to answer that call for help as selflessly as he had, both as a Deputy Chief in the New York City Fire Department, and as a volunteer firefighter, in The Garden City Park Fire Department. What no one knew, was on that morning, Firefighter Regan would fall and suffer a severe spinal injury. Knowing Tom, it almost seemed as if nothing could stop him and that he would fight through these injuries as he did countless times before including a hip replacement several months earlier. Unfortunately, on February 17th the members of the Garden City Park Fire Department lost a brother firefighter as Tom succumbed to his injuries. In the days that followed the Chief’s Staff, along with several other dedicated members, spent many hours seeing to it that Firefighter Regan be laid to rest with the same honor that he had served with for so many years.

In the following days, when members gathered in the “Rec-Room”, the conversations were all about Tom. It was evident that Tom was not only one of the most experienced firemen but also a guidance counselor, trainer, friend, comedian, surrogate father-figure to many a young fireman, and The Incident Commander’s Guardian Angel. Of the stories being told, the most famous has to be one in which Tom, while smoking a cigar, directed a young fireman on his knees (to avoid the heat and smoke) in full SCBA that he would have to get up and put the fire out. All of this was done while Tom stood in his traditional long coat and boots impervious to the hazardous conditions around him.

Tom was a fixture at Station Two, were he would work out in the gym, have lunch with his wife Elsie, and chat daily with the regular cast of characters who frequented the firehouse. His loss will be felt for generations to come. In remembrance of Tom, Hillside Heights Engine Company Three has forever retired badge number 303 and erected a memorial at Station Two containing Tom’s old fashioned coat and boots partnered with his iconic $1.50 cigar (which even Tom thought was too much).