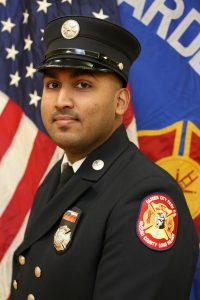 Chiefs Aide M. George has been a member of the Garden City Park Fire Department since December 2013 and has been an active member of Rescue Company Five. Chief’s Aide George has been proactive in many different aspects of the department since he has joined. He was able to finish all schools and training’s required to be a class A firefighter within the first couple months of joining and since been a vital member in helping get the Engine out for calls and also the ambulance out for rescue calls. He was awarded one of the top responders for the years 2014, 2015, and 2016. Currently, he serves as the Captain of Rescue company and as one of the lead advisors for the GCPFD Juniors and teaches possible future recruits the knowledge needed to be a step ahead when transitioning from a junior to a member of fire or rescue in the department. He takes an active role in getting involved in numerous Department and Company committees. Chiefs Aide George will always continue to attend various trainings offered. His reason being is that there will always be a new lesson to be learned. There are new skills always to attain. There are always new things to teach and pass on to help better other members. ” In your life, you only get to do so many things and right now we’ve chosen to do this, so let’s make it great. “-Steve Jobs